BRAMPTON, ON, Feb. 9, 2017 /CNW/ - Medtronic Canada, a subsidiary of Medtronic plc (NYSE:MDT), announced it has obtained Health Canada licence for the IN.PACT Admiral Drug-Coated Balloon (DCB). IN.PACT Admiral DCB is a primary endovascular device used in patients with peripheral artery disease (PAD) in the upper leg – specifically, in the thigh (superficial femoral arteries) and behind the knee (popliteal arteries). 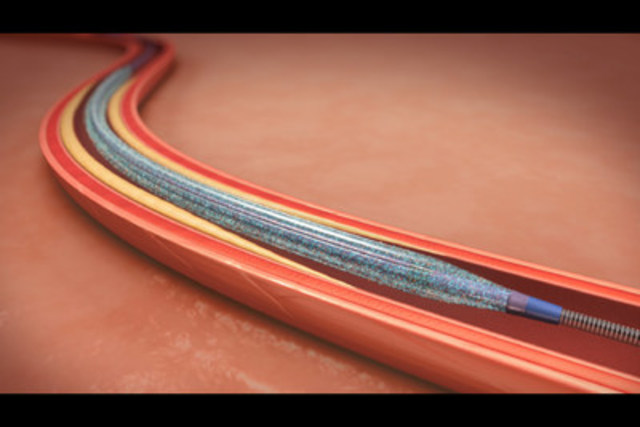 Affecting an estimated 800,000 people in Canada, PAD is a debilitating disease that occurs when arteries become narrowed or blocked by plaque build-up, restricting blood flow.1

The procedure involves inserting a compressed balloon into the artery, inflating the balloon to re-open the blockage, and then removing it. But unlike traditional alternatives like stents or plain balloons, the DCB leaves behind medication designed to help prevent the artery from narrowing (restenosis).

What distinguishes the IN.PACT Admiral DCB from other alternatives for PAD is the coating formulation, composed of a proven anti-proliferative drug (paclitaxel) and an excipient (urea). Once inflated, the coating comes into contact with water in the bloodstream, which hydrates the urea, facilitating the release of solid-phase paclitaxel to the vessel wall to help prevent restenosis.

"What many people don't realize is that PAD in the legs is often connected to health conditions in other parts of the body, especially in the heart," said Michael Blackwell, senior director of Medtronic's CardioVascular Group in Canada. "With drug-coated balloons, we now have a way to more effectively reduce plaque build-up caused by PAD, and we are excited that hospitals in Canada are now able to offer this new technology."

PAD commonly affects arteries in the upper legs and can cause recurrent and painful muscle cramping in the thigh and/or upper calf. The pain can be described as dull, causing heaviness or tightness in the muscles, but often will stop when the person is at rest. Experiencing pain, even while at rest or while sleeping is often a sign of a more severe disease. If not properly treated, PAD can lead to life-threatening complications, and is associated with a four to five times higher risk for heart attack or stroke.2

"Patients experiencing incapacitating intermittent claudication or rest pain need a safe and durable treatment option," said Dr. Andrew Benko, Centre Hospitalier Universitaire de Sherbrooke (CHUS). "In my practice, IN.PACT Admiral DCB will be the device of choice for such patients with femoropopliteal lesions giving the opportunity for outstanding clinical results with very low reintervention rates. This technology has been one of the most significant advancements I have seen in the endovascular management of PAD."

About Medtronic
Medtronic Canada (www.medtronic.ca), headquartered in Brampton, Ontario is a subsidiary of Medtronic plc, which is among the world's largest medical technology, services and solutions companies — alleviating pain, restoring health and extending life for millions of people around the world. Medtronic is proud to employ over 1,600 people in Canada, serving physicians, hospitals and patients across the country. The company is focused on collaborating with stakeholders around the world to take healthcare Further, Together.

Any forward looking statements are subject to risks and uncertainties such as those described in Medtronicʹs periodic reports on file with the Securities and Exchange Commission. Actual results may differ materially from anticipated results.